The Defence White Paper 2016 sets out the Government’s expectations for Defence over the coming decades and includes a 15-year modernisation plan worth nearly $20 billion to ensure the New Zealand Defence Force has the capabilities it needs to meet the country’s security and defence challenges. 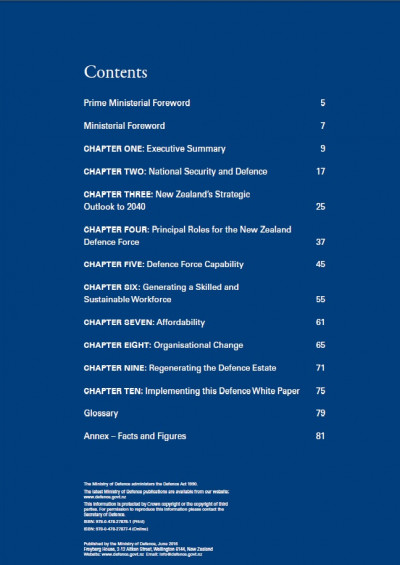 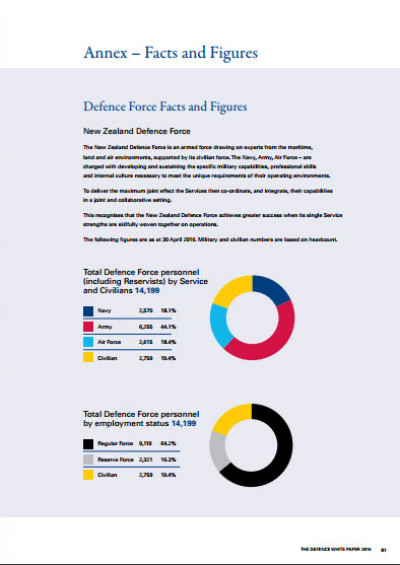 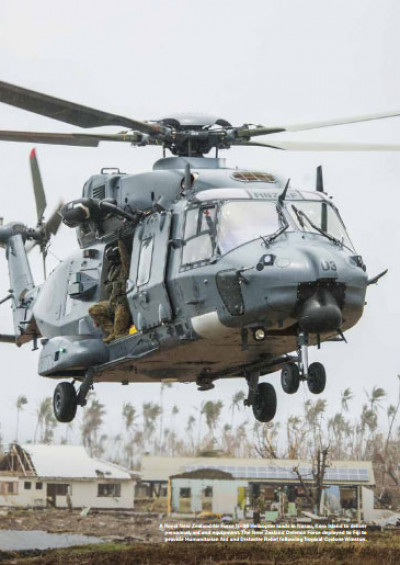 Published by the Ministry of Defence, June 2016

The Defence White Paper 2016 provides the foundation for New Zealand’s security now and into the future at a time of increasing instability and uncertainty in the international strategic environment.

The public’s views, from over 300 written submissions and meetings around the country, have informed the development of this White Paper, and are reflected in the Summary of Submissions Report.

New Zealanders have been very clear about their expectations that the Defence Force has capabilities that are up-to-date, interoperable with our close partners and able to respond to a range of contingencies.

The importance of modern, combat-focussed capabilities, and having the right people to operate them, was a consistent theme of the Defence White Paper public consultation process.

The Defence White Paper 2016 sets out:

The Secretary of Defence, supported by the Chief of Defence Force, is responsible for the White Paper. Direction was provided by the Minister of Defence and by other Ministers as required. The Secretary of Defence is supported by the Defence Capability Management Board and the Security and Intelligence Board of the Officials Committee for Domestic and External Security Coordination (ODESC-SIB). Central agencies such as the State Services Commission and the Treasury were kept informed.

The Minister of Defence drew upon the results of a targeted public consultation process to inform the White Paper 2016.

The Minister of Defence was supported by an advisory panel throughout the White Paper process. It provided independent advice on all aspects of the White Paper, including policy guidance, capability development and organisational direction. The Panel was chaired by Brian Roche, and included Dr Wayne Mapp, Corinne Haines, and Rear Admiral (ret) David Ledson. The advisory panel was announced in a press release.

Cabinet direction was sought at key policy junctures throughout the development of the White Paper. A draft Defence White Paper was presented to the Minister of Defence at the end of 2015.

All costs related to the development of the Defence White Paper 2016 were charged against Vote Defence.

What is the Defence White Paper 2016?

The White Paper sets out the Government’s Defence policy, and describes the security threats, challenges and opportunities New Zealand is likely to encounter over the next 25 years.

The White Paper also provides the blueprint for how the New Zealand Defence Force should respond to these challenges, including its international defence relationships, the roles and tasks it must undertake, and the ships, aircraft, vehicles and equipment it needs to undertake these effectively.

This White Paper has a strong focus on maintaining the overall affordability of the Defence Force. It sets out the organisational direction for Defence, including how it intends to attract and retain a skilled workforce, strengthen its organisational and capability management, and manage its infrastructure.

The Government last issued a Defence White Paper in 2010. Why is it necessary to publish another White Paper?

A new White Paper is necessary because the international environment has changed in the last five years. This means that the Government has to reassess its defence policy and capability priorities to ensure they remain fit for purpose out to 2030 and beyond.

How was the White Paper developed?

The White Paper was developed in close consultation with a range of other agencies, including the Treasury, Department of the Prime Minister and Cabinet, Ministry of Foreign Affairs and Trade, and the State Services Commission.

A wider agency group consisting of Police, Customs, Ministry of Business Innovation and Employment, the New Zealand Security and Intelligence Service, and the Government Communications Security Bureau were also engaged as part of the development of the White Paper.

A Ministerial Advisory Panel consisting of four members with widely recognised commercial, public sector and Defence expertise, including a former Minister of Defence, was appointed. The Panel was chaired by New Zealand Post Group CEO Brian Roche. Panel members provided the Minister of Defence with independent advice as part of the development of the White Paper.

What public consultation has taken place as part of the White Paper?

Thirteen public meetings were held around New Zealand, hosted by local Members of Parliament and attended by senior Defence officials. Visits were made to eleven Defence Force Camps and Bases. Approximately 300 written submissions have been received, along with the oral submissions made at the meetings.

The key themes to emerge from the consultation were:

The results of the public consultation are reflected in the Summary of Submissions document.

What kind of Defence Force does New Zealand currently have?

New Zealand has a highly professional and well-trained Defence force. The New Zealand Defence Force supports the work of a range of other New Zealand government agencies in addressing challenges to domestic security, including counter-terrorism, maritime surveillance and response to natural disasters.

The Defence Force also plays an important role in advancing New Zealand’s interests regionally and internationally. In the Pacific, it supports the Government’s efforts to help support Pacific Island states and provides humanitarian assistance and disaster relief in the wake of natural disasters.

The Defence Force continues to participate in United Nations and other multinational operations, from South Sudan to Korea, reinforcing New Zealand’s commitment to collective security and the international rule of law.
Such operations have formed a major part of the Defence Force’s role over the past two decades, with around 400 personnel deployed around the world at any given time.

What differentiates this White Paper from its predecessor?

Extensive analysis as part of the White Paper’s development allows the Government to signal a commitment to investment worth close to $20 billion over the next 15 years. This spending will be spread over a long period of time and includes current plans to replace the ANZAC frigates and strategic and tactical airlift capability, as well as some growth in personnel numbers, through to the new and enhanced capabilities outlined in the White Paper.

The White Paper sets out a range of challenges likely to affect New Zealand’s security interests over the next 25 years, including:

What new Defence capabilities will the Government invest in as a result of the White Paper?

An improved air surveillance capability will:

An ice-strengthened third offshore patrol vessel will enable the Defence Force to conduct patrols in the Southern Ocean following the introduction of new international Polar Code regulations in 2018.

An ice-strengthened maritime sustainment capability in the form of a tanker will enable the supply of fuel and other goods to Antarctica in the summer months, once an ice breaker had cleared a channel.

An enhanced littoral operations support capability will support the deployment of forces from the sea onto land, provide enhanced self protection, hydrographic (mapping) and intelligence, surveillance and reconnaissance capabilities. A more capable littoral operations support vessel would increase the range of operations the Defence Force could undertake independently in the South Pacific, and adds valuable depth to the Defence Force’s maritime surveillance and sea transport capabilities.

A new cyber support capability to improve the protection of Defence Force networks and provide dedicated support for deployed operations.

What would the cyber security and support capability actually be doing? Does it reflect a change in Government policy?

A Defence Force cyber security and support capability would be focussed on providing services for deployed operations and specialist military equipment. This is not a new role for the Defence Force but a modernising and future proofing of its ability to undertake its standing roles and tasks. The proposed capability would not overlap with the role of other agencies.

How are Antarctica and the Southern Ocean so prominent in the White Paper?

New Zealand has a strong interest in preserving stability and the natural environment in these areas. There is an increasing level of international activity in Antarctica and the Southern Ocean.
This White Paper needed to be clear about New Zealand’s interests in the region, the Defence Force’s role in supporting these, and what this means for its capabilities.

When will more detail be available about the Defence capabilities signaled in the White Paper?

More detail about the planned mix of Defence Force capabilities will be provided when the next Defence Capability Plan is published later in 2016.

How does Defence intend to manage its affordability into the future?

The Government has an understanding of the costs associated with the Defence Force structure described in the White Paper because Defence capital and operating costs have been modelled out to 2030.
Such costing work is now a regular feature of the five-yearly cycle of strategically-focussed Defence activity that includes Defence Assessments, White Papers and ‘mid-point’ reviews. Mid-point review processes consider the overall balance between Defence policy, capability and funding.

Collectively, this activity helps Defence identify changes in the international strategic environment, their possible implications for New Zealand, its Defence policy and the capabilities required by the Defence Force to fulfil its roles and tasks. The use of mid-point reviews between Defence White Papers will enable Defence to regularly update and assess its overall affordability picture.

Ahead of another Defence White Paper in five years’ time, Defence will conduct a mid-point review in 2018, looking out to 2035, as well as a formal Defence Assessment.

Why isn't the White Paper more specific about the costs attached to individual capabilities?

How does New Zealand's Defence expenditure compare with other countries (as a % of GDP)?

New Zealand’s Defence expenditure as a percentage of Gross Domestic Product (GDP) is expected to remain on average at around 1% out to 2030.

No. But the White Paper does identify specific areas where Defence must build on the progress it has made in the past five years, such as capability management.