This consultation document was provided to stakeholders as part of the targeted consultation process for the Inspector-General of Defence proposals. 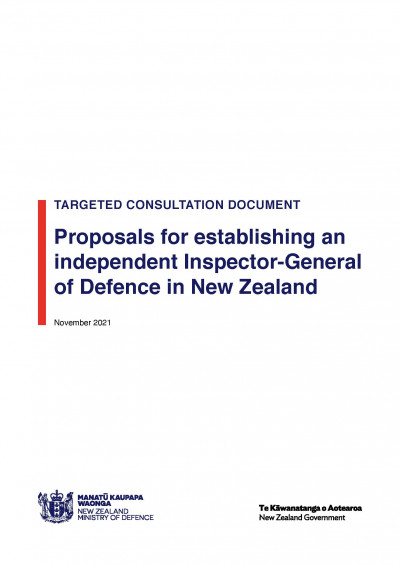 Further details regarding this work are provided on this Story: https://www.defence.govt.nz/the-latest/story/establishing-an-independent-inspector-general-of-defence(external link)

Frequently Asked Questions about the Inspector-General of Defence (IGD) proposals

What is the IGD intended to do?

The current proposal is for the IGD to have three functions:

What will the IGD be able to look into?

Veteran’s Affairs is accountable to the Minister for Veterans’ Affairs and unlike the rest of the NZDF, operates under the requirements of the Veterans’ Support Act 2014, rather than the Defence Act 1990.

Who will the IGD be independent from?

It is proposed that the IGD would operate independently including from the NZDF, the Ministry of Defence, and Ministers. Strong independence ensures that the IGD would not be overly influenced by or reliant on others when initiating or undertaking its work. This level of independence would also give Ministers and the public reassurance about the integrity of the IGD’s work.

How much will it cost to establish the IGD and to run annually?

The Budget for the establishment of the IDG is yet to be determined. The funding detail will depend on the final proposals agreed by the Government following targeted consultation.

When will the IGD be established?

New legislation (i.e. a bill) would need to be passed to establish the proposed IGD.

At this early stage it is estimated that the IGD would be up and running within a year of a bill passing. This timing is subject to the Government deciding to introduce a bill to the House of Representatives, and then the bill being passed into law.

Who is the Government consulting with on the proposals to establish an IGD?

The Government has reached out to seek views of interested stakeholders, with a range of diverse perspectives. This includes relevant legal experts and academics, Māori representatives, veterans’ organisations, non-governmental organisations, the Inquiry authors, and the authors of the book Hit and Run.

The Government isn’t consulting with me, and I have a view – what should I do?

After the targeted consultation period is over and if new legislation (i.e. a bill) is introduced next year, you and any other interested parties would have an opportunity to have a say on the proposals as part of the Select Committee process. Individuals and organisations are able to make written and oral submissions to the Select Committee that is considering the bill. The Select Committee would then consider what submitters have told them, along with advice from officials, and share the committee’s findings and recommendations with Parliament.